The Final Retreat That Never Was

Years ago, when The Whitman Institute board put our spend out in motion, we envisioned our final retreat. A large, warm gathering of colleagues who had become friends and family would rest and reflect under the beautiful stars and trees of California’s northern coast. There would be toasts over fire pits, connection, inquiry, dancing, and we’d do our best to try to make sense of this crazy world. It would be the embodiment of all the learning from many retreats prior, sweetly similar but fresh and current. We would close down what started as a small, quirky, off-beat operating foundation as part of a dynamic, interconnected network of heart-centered creative disruptors.

For many obvious, pandemic-y reasons, we made the tough call that the retreat that we envisioned a decade ago is not to be. Instead, we will close our doors with a handful of smaller gatherings and a virtual celebration. 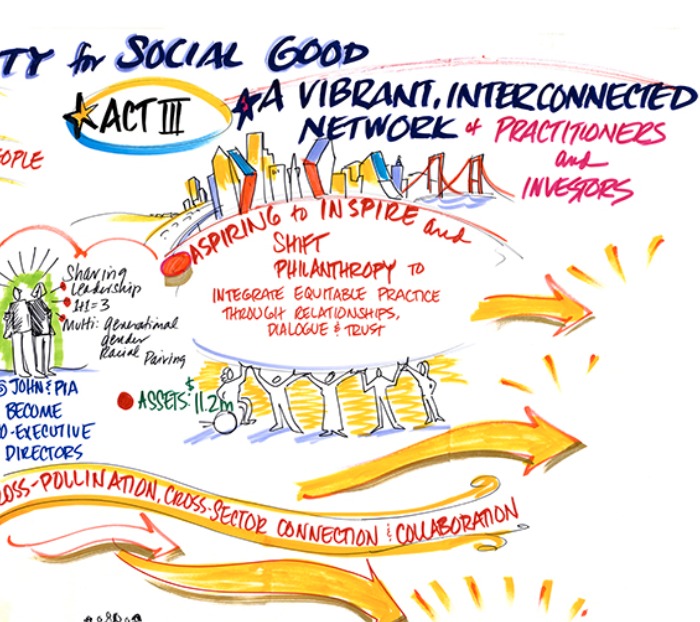 This is a graphic illustration from 2014 where we pictured the end of our time as an institution.

I look at that image from the graphic recording of aspirational conversations from nearly a decade ago, and I am both heartened and sad. I believe we’ve lived into this intention, and more. What we did not realize when we painted this sunny picture was what would transpire in between then and now.

It has been rough. We’ve lost so many people to Covid in this country alone. We’ve gained and lost ground in terms of civil and voting rights, climate, reproductive rights, and on many many fronts. Most everyone I know is in transition of some kind. Most everyone I know has lost someone or something vital in the past few years. We have yet to stop and be still as a nation to honor what has been lost. There have been no breaks.

We need the kind of break that a retreat would offer. The kind of space we created the last time we gathered in 2018, when our retreat’s theme was A Future We Can Trust. I hope by sharing some of what we’ve learned over the years, we can plant the seeds for you to think about creating a restful, generative space when the time feels right again to gather.

It is deceptively complex to create the conditions for a retreat that seems so simple. Too little structure can alienate those who are newer or less comfortable brokering spaces with strangers. Too much structure throttles emergence and organic ebb and flow.

Historically, the design of our retreats started not so much with what or how, but who. We would literally write down or chart (back in the days of chart paper and markers, before jamboards and zoom chats were the only way for visual thinkers to process in group time) the names of everyone who was coming. Somehow just imagining them all together started to cull creative threads. Reflecting on who was coming and how they show up and how they tended to relate to others was the baseline. A coach once advised me to walk my body through a plan – travel or facilitation – and feel it out in 3D. When we meditated on who was coming, a 3D visualization emerged. Their talents & questions shaped offerings and structures.

Context was another big factor. What was going on in the contexts and ecosystems we inhabit? Too often the contexts were stressy stressors stressing us all out. We came to hold the retreats as a place to decompress, a space where no one, not even we, had to perform or put on a brave face.

Given the ever-shifting and troubling contexts of 2020 to now (or even 2016 to now), the final retreat would have required us to deeply listen for what our people need, now. Based anecdotally on conversations I’ve had with our community in the past month, here are some elements that may have made it in that have never appeared in previous retreats:

As sad as it is we won’t have the chance to gather one more time, I like to imagine what it would be like. The theme of our final retreat would have been that never was? Nourishing the Now.

Nourishing the Now would mean tending to the ways we are weary, and giving us space to rage, be vulnerable, learn adaptation techniques, and rest. We have always been an optimistic group. We believe in our collective power to imagine, shape, and create. At the same time, our retreats are a come as you are situation, so there is room for all of our messy, brokenness as well as our inspirations and light.

It would have been an invitation to rest. We would host our community in a beautiful place. Made sure they had means, childcare, eldercare, and time to get there. We would not have asked for much in terms of “engagement.” Just an opening circle, a closing circle, and a few offerings along creative, spiritual, and restorative lines in between. We would have nourished ourselves over tasty, nutritive meals. There would have been lots of unstructured time, maybe film, maybe music, stories, laughter, and enough time to acknowledge each other, connect with friends new and old, and remember those who were here at the beginning and who are not with us now.

A dear member of our community, Edd Conboy, used to say that a broken heart can break us open. So that is the spirit in which I am inhabiting a 3D prototype of our final retreat. Our hearts may be broken. We may feel broken in too many ways to count. And we are hopefully broken open, and available to what is, to each other, now.