Is it a strategy? An outcome? A tool? It’s a Network! 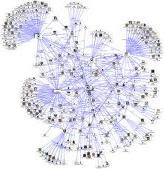 From the Hollywood hit The Social Network to the recently published non-profit “how to” guide The Networked Nonprofit, it’s clear that in the private, public, and philanthropic sectors – we are abuzz about the power of networks. Particularly social networks.

I had the opportunity a few days ago, at the Leadership and Networks Conversation co-hosted by the Leadership Learning Community and The Monitor Institute, to reflect with a lively and lovely group of smart people on the phenomenon known as networks. [Or perhaps formerly known as coalitions and associations.] My break away discussion group was made up of folks from foundations, leadership development programs, and staff from the host organizations.

We posed many questions: What precisely are we talking about when we talk about networks? Where is the power of a network (in the convening hub? The outcomes it can produce?) How do we measure the impact of networks? How is the social networking of today different from the coalitions and alliances and associations that have always existed in every sector to organize around specific agendas and solutions? Does the intuitive, proliferating advent of technology on a global scale “upgrade” our existing notions of networking? Are social media tools the 21st century evolution of communication tools like phones and copy machines that helped spread the organized wildfire of Civil Rights Movement in the 60’s?

Some use the concept of network to mean something like membership – for instance membership around a cause the Sierra Club. Another understanding of networks is famously illustrated by Facebook “friends” – a large, loose grouping of people who an individual may know through professional, social, family, political, and shared interest channels. Allison Fine and Beth Kanter define social networks as “at their most basic level simple, intuitive structures…with two main components: people or organizations … and the connections between them.” (pg. 27, The Networked Nonprofit)

I gravitate towards the notion that networks are intuitive. And also that networking itself is an ancient (tribal, perhaps), not a new, concept. And, at the fundamental center of it, networking is about the relationships and connections between people. The Leadership Learning Community’s own suppositions that leading networks requires nurturing of trust and reciprocity, transparency, the bridging of differences, and multiple points of engagement are all built on very familiar strategies for creating, nurturing, and sustaining authentic relationships over time. Fine and Kanter themselves emphasize that social networking tools do not replace face-to-face engagement, though these tools make it possible to stay in stronger or lighter touch with people when time and geography might have inhibited that.

Indeed, Shannon Farley, the Executive Director of Spark in San Francisco (a participant in my group) often shares that relationship building and sustaining is the core engagement strategy in keeping Spark’s network of over 5,000 young professionals in touch with each other and the grassroots women’s projects that they support through mainly individual donations every year. She describes how low and high touch engagement opportunities (from taking two minutes to send an email to serving on the grants committee which decides how to direct funds raised), often enable members to self organize given that Spark accomplishes its sizable mission with one staff and a cadre of volunteers.

The Whitman Institute’s own John Esterle reflected on the networking phenomenon from a funder perspective. He noted that foundations have always been slow to fund the “soft skills” of relationship building and that sometimes the moniker of Leadership Development is used as an overly wide umbrella under which soft skills, like relationship building and reflection, are shoved. The Whitman Institute’s openly iterated support for relationship building, clear purpose, and reflection as integral components seems distinct from many other philanthropic approaches. And John wondered aloud if networking, as potentially the next “sexy” best thing on the funding horizon, might become another code word for explicitly funding soft skills?

Several participants who represented other foundations expressed yet another important edge to the conversation. To what end? We have mammoth economic, social, and political problems that are uprooting long-standing support structures of the poor and disadvantaged in California. What are the outcomes we want to see happen and are networks with distributed responsibilities the most strategic way to achieve those? What if certain efforts, like Rock The Vote, actually truly need a well-informed command center that gives out directives and delegates work to folks? [It seems Obama’s campaign was built on a platform that integrated both centralized command and self-organizing tools. See an interesting Conversation Agent analysis of the Obama’s social media platform here.] It brought up some concerns folks had about what seemed to them a trend towards centralized, distributive, and non-hierarchical leadership structures being held aloft as a gold standard. The rich discussion that ensued is material for another blog post on the sector’s evolving understanding of leadership!

As a process aside, I was struck by how powerful it was to have foundation folk and folks who get funding from foundations sitting together in open dialogue. The perspectives being shared were unexpectedly wide ranging. There certainly wasn’t automatic agreement and, actually, several points of disagreement throughout the conversation. We did exchange respectful communication, curiosity, listening, and what I experienced as a cathartic moment of real engagement on the big questions we raised. In fact, the most refreshing take away from the experience is that the questions stay with me, even as any final answers elude.

So. Is a (social) network a tool? A mindset? An outcome? I’m undecided. What’s your take?