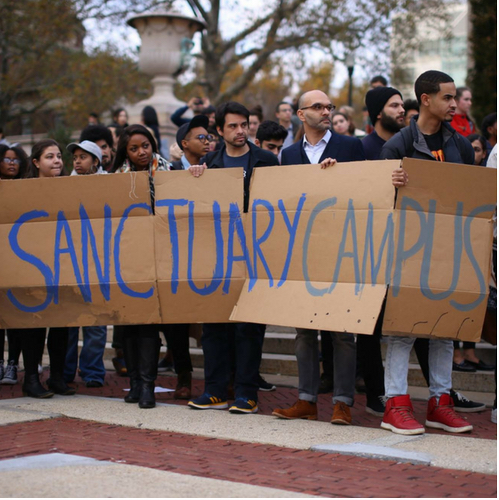 The Trump Effect at TWI, and Elsewhere

The Trump effect, at The Whitman Institute (and elsewhere)

The Trump administration is having an unmistakable impact on philanthropy. That was brought home to me at this month’s Skoll World Forum, notably with the Omidyar Network’s promise to commit $100 million to support independent journalism and combat hate. On a panel about philanthropy, Laleh Ispahani of the Open Society Foundations described the organization’s $10-million Communities Against Hate initiative, which is making nearly 100 grants to nonprofits that promote tolerance. The Doris Duke Charitable Foundation will support arts and cultural programs aimed at reducing bias against Muslims. The Craig Newmark Foundation will “stand against deceptive and fake news.” The Rockefeller Foundation made grants to the International Rescue Committee, the ACLU Foundation and the Anti-Defamation League. Etc.

All good. But is it enough? Consider, by way of contrast, how The Whitman Institute (TWI), a small foundation based in San Francisco, responded to Trump. Whitman’s trustees decided in January to conduct the bulk of its grant-making in the next two or three years, to maximize its impact in these parlous times. Since then, Whitman has backed nonprofits that fight for vulnerable populations–undocumented immigrants, incarcerated youth and Muslim and Arab communities in the US, among others.

Whitman’s decision to spend down, in a hurry, is worth pondering. Pia Infante, the foundation’s co-executive director, told me: “At this moment in history, it’s important to take a values-based stand…All of us were terribly concerned for the future of American democracy. It feels not just threatening, but dangerous.”

If, unlike Infante, you aren’t worried about our nation, you aren’t paying attention. As Andrew Sullivan wrote last week about Trump:

What on earth is the point of trying to understand him when there is nothing to understand? Calling him a liar is true enough, but liars have some cognitive grip on reality, and he doesn’t…He has no strategy beyond the next 24 hours, no guiding philosophy, no politics, no consistency at all — just whatever makes him feel good about himself this second. He therefore believes whatever bizarre nonfact he can instantly cook up in his addled head, or whatever the last person who spoke to him said….Occam’s razor points us to the obvious: He has absolutely no idea what he’s doing. Which is reassuring and still terrifying all at once.

Terrifying indeed. So, for that matter, is the threat of global warming. (See my recent blogpost, It’s crunch time for climate philanthropy.) If neither the Trump White House nor global warming concern you, what about the billions of people on our planet who lack electricity, clean water and decent health care?

The point is, foundations could do more about Trump, climate change, global poverty or whatever concerns them, but they don’t. This is largely because most foundations want to go on in perpetuity. If, as a foundation leader, your primary goal is to keep your foundation alive, you won’t feel the urgency to do as much good as you can right now. Which, frankly, is bad news for people threatened by Trump, the health of the planet or the world’s poorest people.

Frederick Crocker Whitman, an heir to the Crocker Bank fortune, was 71 when he founded The Whitman Institute in 1985. He had a painful family history, and wanted to use his wealth to help people make better decisions, according to his longtime friend and colleague, John Esterle. When Whitman died in 2004, he left the foundation in Esterle’s hands. Its eclectic grant-making promoted thoughtful decision-making. “From classrooms to prisons, neighborhood centers to rural retreats, film screenings to town halls, I was interested in where dialogue was being used with passion and purpose,” Esterle has written.

Its decision to spend down was driven partly by necessity. Whitman’s endowment, which started out at nearly $25 million, dwindled after the 2008 financial crisis. For most of its history, it has given away more than the 5 percent of assets required by law. In 2011, its board voted to spend down by 2022; most of that money will be spent sooner.

Deciding to spend down was made easier by the fact that Whitman’s staff was small. Esterle and Pia Infante are the only two full-time employees. Their philosophy of grant-making also came into play: Whitman provides unrestricted, multi-year funding to nonprofits, an approach that it calls trust-based investment that has the effect of sharing power with its grantees. By contrast, some foundation develop their own strategies and then pay nonprofits to carry them out.

Esterle says: “People appreciated and valued ongoing, general operating support, especially when it was coupled with an invitation to have more than a transactional relationship.” Infante put it this way: “If I really believe in an organization and its leadership, why not make a commitment?” Not surprisingly, grantees described Whitman as “thoughtful,” “trusting” and “engaged” as part of a Grantee Perception Report published in 2013 by the Center for Effective Philanthropy.

Liberated from the need to preserve its assets, Whitman has been active since Trump’s election. It has supported, among others, Cosecha, which calls itself “a nonviolent movement working to win permanent protection, dignity and respect for the 11 million undocumented people in this country,” and The Beat Within, a longtime grantee that publishes writing and art by incarcerated youth. It also donated to Grassroots Climate Solutions Fund, a collaboration among four grant-makers to back global climate action and advocacy.

Infante told me that setting a date certain for the foundation’s end brought not just added resources but new focus. “Every foundation needs to examine the question of perpetuity,” she told me. “Are we staying in business just to keep ourselves in business?”

Roughly one in 10 foundations plan to limit their life, according to a recent report from the Center for Effective Philanthropy. Several large foundations, including the Bill & Melinda Gates Foundation and the Edna McConnell Clark Foundation, have promised to shut their doors, eventually. The Atlantic Philanthropies ended its grant-making last year.

Bravo to them all! New foundations, after all, will come onto the scene to replace them. Since 2000, wealthy Americans have created 30,000 (!) foundations and 185,000 donor-advised funds, according to David Callahan’s new book, The Givers.  Billionaires have signed the Giving Pledge. Put simply, the supply of philanthropic assets is growing even as the need for them is shrinking, as the world becomes healthier, wealthier and better educated.

Seen in that light, the idea that foundations should live forever makes no sense. As Felix Salmon recently wrote: “The point of a charitable foundation should be charity, not self-perpetuation….Nothing lasts forever, and nothing should.”