The Difference between Dialogue and Debate 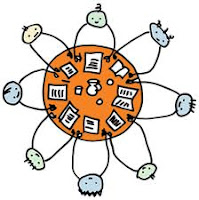 On March 4th, I attended California Council for Humanities‘ “Forum on Democracy and the Culture of Civic Conversation.” The Forum was the kick-off event for CCH’s promising new two-year statewide initiative, Searching for Democracy. The day featured a thoughtful and informative mix of speakers and panels, but it was the closing session that stuck with me.
At one point the panel conversation featured much talk about dialogue and democracy, so in the Q&A I asked the speakers what they thought were the key elements of dialogue. I particularly wanted to hear their thoughts because in the opening session someone asked the panel how they understood the difference between debate and dialogue. The panel looked a bit puzzled by the question and the one answer was that it is a distinction without a difference.

I referenced her opening session question when I asked my closing session one (What are the key elements of dialogue?) and this time there was more of a response.

Chris Abani answered first and Omnia El Sharky echoed his answer. They both said that entering a conversation with a sense of vulnerability was the foundational piece of what it means to be in dialogue. Dialogue occurs when you embrace the prospect that the conversation you’re engaging in might truly change your mind. And for that kind of change to occur we need to allow ourselves to be open, to be vulnerable. This answer resonated with me, particularly since at the time it came right on the heels of my last blog post on “The Power of Vulnerability.”

The importance of language in terms of how we create and frame meaning has been a theme touched on in a number of recent posts on our blog. Consequently, I’ve been reflecting on how and to what degree “vulnerability” is used as part of the framing of both dialogue — and of leadership. Most of us probably like the notion that a leader is someone who can engage in, and actively promote, dialogue. But how often do we talk about vulnerability as an aspect of both dialogue and leadership? In terms of our public discourse, do we reward political leaders who show evidence of changing their minds as a result of dialogue? Or do we punish them? Must a public leader exude certainty at all times, even if that’s not what they’re at?

So, in thinking about democracy and our culture of civic conversation, I’m struck by how things might shift if we started injecting “I don’t know” more often into our public discourse.

When we enter a debate it’s with our armor on. To enter a dialogue means taking that armor off. When engaging across difference there’s a real tension between these two orientations, so context also becomes very important. This is a point Jane Junn addressed in her answer to my question by stressing the importance of being aware of the context, the structures, that frame and shape a dialogue.

After the session ended the woman who asked the unanswered question in the morning came up and thanked me for mine. So, another part of what sticks for me from that final session was the importance of asking a question related to language and the avenues to meaning such a question opens up.