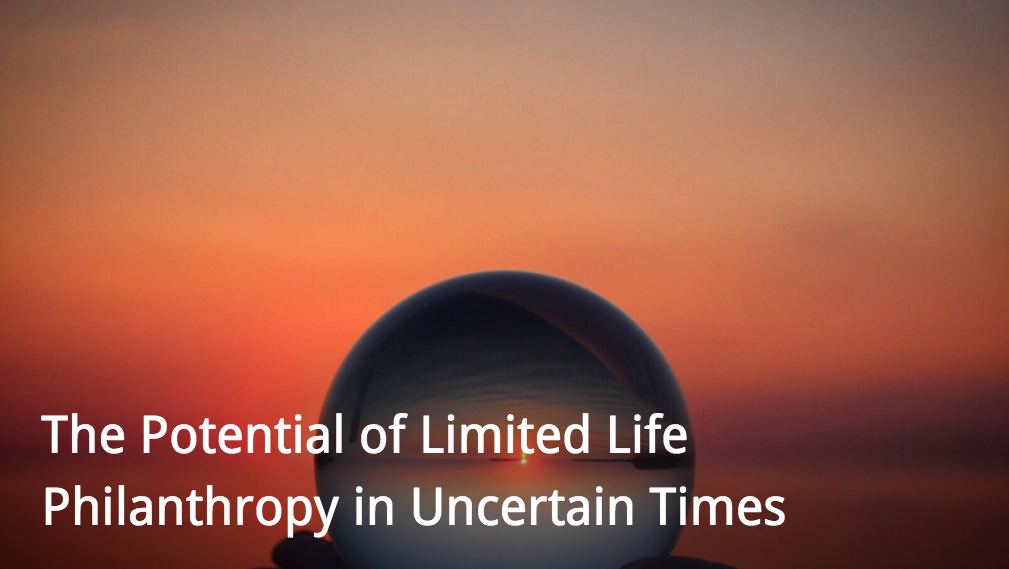 The Potential of Limited Life Philanthropy in Uncertain Times

(Orginally posted on the Center for Effective Philanthropy blog)

CEP’s new report, Shifting Winds: Foundations Respond to a New Political Context, reveals that two-thirds of foundation leaders surveyed said that in light of the current political climate, they are at least contemplating new strategies for their foundations. That finding certainly underscores what I’ve heard in both formal and informal settings since last fall’s election. I continue to wonder, though, how much of this inquiry remains anchored down by people’s adherence to the five percent payout requirement and visions of perpetuity. Despite increasing interest in the issue of spending out, my fear is that the answer is far too many.

That’s why the release of CEP’s A Date Certain: Lessons from Limited Life Foundations earlier this year is so timely. (Of course, I am biased as The Whitman Institute is one of the foundations featured in it.)

Most of the foundations CEP interviewed for the study mentioned increased impact as a major reason for choosing a limited lifespan. And that theme is borne out in recent commentaries related to the report on CEP’s blog.

What I’d like to talk about here is a different “I” word that doesn’t appear in the report or in the posts that have followed it: imagination. Why? Because our experience at The Whitman Institute (TWI) is that choosing to sunset has enabled us to imagine — and act — in ways that wouldn’t have been possible otherwise. And with five years left on our horizon, that process of imagining is still in motion — in relation to our grantmaking, to our advocacy for what and how we fund, and to ideas for creatively telling TWI’s story (or “archiving our knowledge,” as A Date Certain puts it).

Because of a perpetuity timeframe, I think foundations often frame funding options in either/or terms. Multiyear grants or one-time opportunistic funding. Support for long-term partners or investments in new leaders and emergent efforts. Funding within defined categories or investing in efforts that don’t fit within specific boxes.

Or, as we’ve seen since the election, some foundations are contemplating withdrawing support from various organizations in order to embark in new strategic directions (a real worry for many). The list could go on.

These constraining frames can apply to issues of internal capacity, convening, communications, advocacy, evaluation, and support beyond the check, as well.

I’m simplifying, but the main point is this: what we’ve learned at TWI is that with more money available because of our defined lifespan, our palette of possibilities expanded and we could take both/and approaches to these and other choices rather than framing them as either/or. We believe doing so has made us a more responsive and effective funder — and advocate.

As one of our board members once pointed out, it appears that our impact is increasing as our endowment decreases. If defined lifespans were the norm rather than the exception, might not that observation apply to the whole field of philanthropy?

Here’s a thought experiment. How might the current scarcity model that dominates the nonprofit sector be transformed if more foundations transferred money from their endowments in the next 20 years to build up “endowment” funds that nonprofits could use in a way that gave them predictable, sustained operating funds? I’m particularly thinking of the increasing numbers of large foundations, but it could apply to all foundations.

The current political climate and the urgency and complexities of the problems and challenges confronting communities call on us to not only push back against injustice and inequity, but also to exercise our political and cultural imaginations as to what is possible. We need more positive, imaginative stories about how we can do things differently; aspirations that we can grow into.

For funders, Quixote Foundation, which recently closed its doors, offers one such story, including using different language to describe its journey. Rather than spending down, they saw themselves as “spending up.” Instead of a limited lifespan, they saw themselves choosing a “strategic lifespan” that envisions their impact living on in the work of the people they have supported.

While I wouldn’t presume to say that every foundation should limit their lifespan (though I’m tempted), I do believe every foundation should periodically revisit the assumption of perpetuity and examine how it links to their purpose, mission, and values. Given where the world is at, I’d say there’s no better time to do this than the present.

After all, as Vu Le stated during a plenary panel at the CEP conference in April, “Why save for a rainy day when it’s pouring outside?”