Is Failure a Destination Point On the Way to Success? 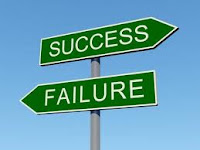 “So why do I talk about the benefits of failure? Simply because failure meant a stripping away of the inessential. I stopped pretending to myself that I was anything other than what I was, and began to direct all my energy into finishing the only work that mattered to me. Had I really succeeded at anything else, I might never have found the determination to succeed in the one arena I believed I truly belonged.” – From JK Rowling’s Harvard Commencement Speech in 2008.

Failure as a learning experience is a notion that John and I have been batting about for years now. At one point, we envisioned a convening centered entirely on stories of fantastical failure, and what we learn from them. The novel that didn’t get written, the organization that never opened its doors, the relationships that ended despite heroic efforts to stay connected, or the convening that was never convened!

As I watched JK Rowling’s speech, which was recently posted as a TED talk, I was reminded again about the richness of failure as an experience and topic. I share it here as an invitation to the TWI community.

Is failure a destination point or a detour?

Do we flounder before flowering?